Media Faq About us

Our correspondence about red phosphorus use (ion migration)

As for AC redundancy countermeasures in the AC adapter and switching power supply, we have been taking measures as soon as possible before the close up is done recently. This page introduces some of the thorough measures for so-called silent change.

From around the summer of 2000, problems with HDD (hard disk drive) have become evident in personal computers and PC server users. The cause of the failure is a pin-to-pin short circuit due to migration of Ag which is the material of pins in the LSI package. Although the problem of HDD failure had a major influence on the electronics industry, the phenomenon that metal migration occurs due to phosphorus (P), moisture, and electric field was informed in the electronics industry.

However, accidents occurred that seemed to have not penetrated this knowledge up to the raw material plastic makers. In 2014 NITE (Independent Administrative Institution, Product Evaluation and Technology Infrastructure Organization) released "Flame retardant method of plastics and examples of trouble caused by flame retardant", but among them, the DC plug on the secondary side of the AC adapter Accidents are deformed due to heat generation and deformation of parts. The cause was migration caused by red phosphorus added as a resin of the insulating sleeve (aka bushing) of the DC plug part, as a flame retardant of polybutylene phthalate (PBT).

In our company, non-red phosphorus of the flame retardant of the insulation sleeve before the NITE material was released according to customer's request, plastics used for the part where the electric field of the DC plug part is applied from April 2016 For shrinkable tubing) we also started non-red phosphating of flame retardants respectively. We are managing the manufacturer by specifying "Red phosphorus flame retardant not used" in parts approval letter so that parts makers do not perform so-called silent change. Regarding these parts, from April 2016 we measured the content of phosphorus (P) by simple measurement equipment (RoHS fluorescent X-ray equipment) for our acceptance inspection and manage it with the upper control value of 100 ppm I will.

Regarding existing parts, we are using non-red phosphorus flame retardants for other plastics (case, AC pin, AC inlet, DC cord covering, AC cord covering), but from each parts manufacturer " , Or containing 100 ppm or less "is submitted and managed.

You can get the product catalog in PDF. 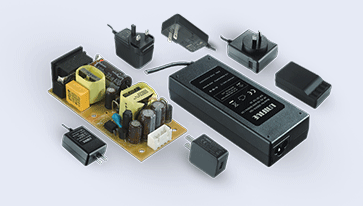 Since 1989, UNIFIVE has maintained the quality of their AC power adapters and switching power supplies through rigorous quality controls.